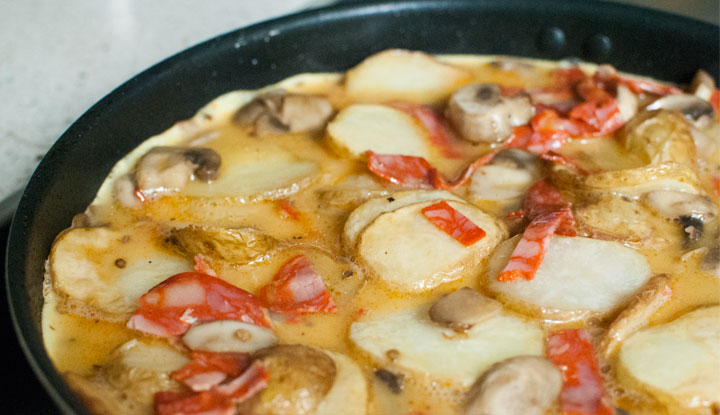 Living in Spain nine years, I obviously became a huge fan of tapas, those small shared dishes that you eat along with a drink at any time of the day or as an appetizer. A “tapa” is originally a courtesy small plate served along with a drink in bars and restaurants to cover the glass, and offer a sample of the dishes available. Probably also to mitigate the effects of alcohol!  It became, over time, an  emblematic Spanish  dish from which the Spanish omelette is probably the most famous one. Nowadays you can still have a free tapa with your drink, specially in the South of Spain, but most of the time you have to order it.

You can find a huge variety of tapas, with meat, fish, seafood, vegetables, rice, pasta, potatoes etc. In the Basque country the equivalent of tapas, pinchos, are a little piece of bread topped with various ingredients and held  together with a toothpick. Of course one of the most famous ones is the potatoe Spanish omelette or “tortilla de patatas”.

What I propose today is a Spanish omelette filled with ingredients I used in France to make my favourite “omelette”, ie potatoes, chorizo ​​and mushrooms or spinach (I love both versions and can’t really choose which one to display). I now fry the potatoes and cook the eggs differently than when I was in France, so now it is a Spanish ‘tortilla’ instead of a French ‘omelette’..

Cooking the eggs is the most delicate part of the recipe, and it also depends of each ones tastes: either you prefer the eggs a bit undercooked , so that the inside of the tortilla is slightly liquid, a bit like scrambled eggs, ie my favorite version, or you prefer to heat the omelette until the inside is well cooked as well.

I love it because:

OMELETTE INGREDIENTS FOR A 24 CM PAN

The omelette is ready and can be eaten either hot in the moment, or later when it is cold.